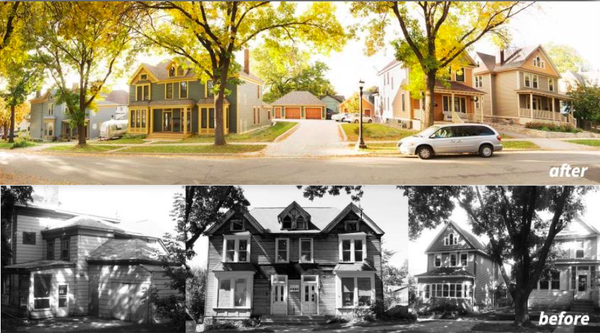 HSP played an instrumental role in initiating and planning the Fourth Street Preservation Project in Dayton’s Bluff, where an entire residential block had been decimated by disinvestment, the foreclosure crisis, and a lack of social cohesion. Nine of the block’s 17 buildings were vacant, many properties were in serious disrepair, only two houses were owner-occupied, police responded daily to reports of criminal activity, and the block, on the brink of becoming total blight, threatened the stability of the surrounding neighborhood as well.

This transformative project, a partnership of federal, state, local, non-profit, for-profit, community, and sustainability organizations, resulted in the complete rehabilitation of seven houses with a total of nine units. Historic Saint Paul was a partner in the project from the early planning stages and received a Saint Paul Heritage Preservation Award in 2016 for its community planning leadership in the project, which began with a place-based planning process coordinated by Historic Saint Paul. Many other project partners were also awarded.

The Dayton’s Bluff historic district was created in 1992 to recognize...