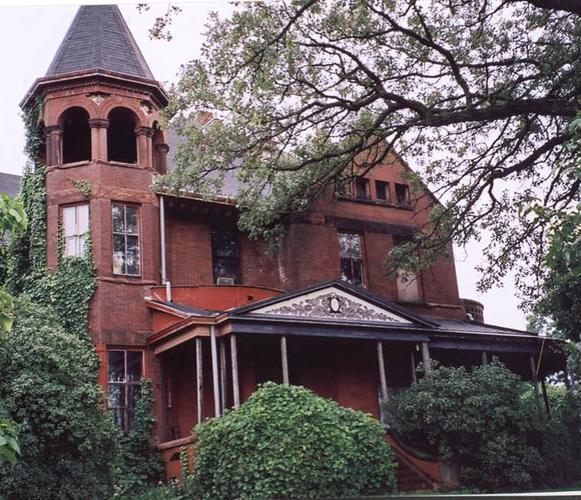 Historic Saint Paul, through the Restore Saint Paul loan program, stabilized the front porch on a Dayton’s Bluff neighborhood landmark, the Giesen-Hauser House. The prominent brick mansion is listed on the National Register of Historic Places due to its association with prominent Saint Paulites and its remarkable architectural features.

The National Register nomination form describes the building as follows:

Situated on the crest of a wooded one-acre parcel overlooking the city of Saint Paul, the Giesen House is a prominent example of brick Queen Anne architecture. Erected in 1891, the design of the residence exemplifies many of the popular elements contributing to the diversity and picturesque qualities of Victorian building. The Giesen House is important for its retention of this character, both in the integrity of the site, and in the integrity of the building.

The original owners, Peter and Mary Giesen, were an enterprising couple. Peter, a book binder, moved to Saint Paul from Germany in 1856. By the 1860s, he became a partner in a business which eventually became “the largest book bindery in the United States.” With his wealth Peter established a German singing society, a German cultural hall and the Mozart Society. In 1900, a local historian said of Peter, “It is due to the interest and efforts of such men as he that Saint Paul is the great and prosperous city that it is today.”

Mary Giesen was as equally industrious as her husband. In 1872, Mary launched Giesen’s Costumes, which grew into one of the largest costume companies in the nation. Costume parties and masquerade balls were a popular diversion in the late 19th century, and Giesen’s outfitted many of Saint Paul’s socialites. Mary also supplied costumes for school plays, Christmas pageants and the Saint Paul Winter Carnival royalty. (For more information on the Giesen Family, see Giesen’s: Costumers to Saint Paul Families and Festivals – 1872-1970 by Virginia L. Martin in the Winter 1994 edition of Ramsey County History.)

In 1907, the Giesens sold the Dayton’s Bluff house to Eric V. Hausler, a railroad contractor and philanthropist. The Hausler family lived in the house for 37 years. Today, the house is gradually being restored by its current occupants, the Ward family. They have returned the interior floor plan to its original layout and recently tuck pointed the brick and installed a new roof.

Historic Saint Paul partnered with the owners and John Erler Custom Carpentry to restore the expansive wrap-around porch on the Giesen-Hausler House. Work to replace a section of the porch framing and decking, install new columns (modeled after the originals) and repair the ceiling and beams. 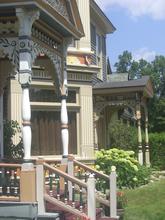