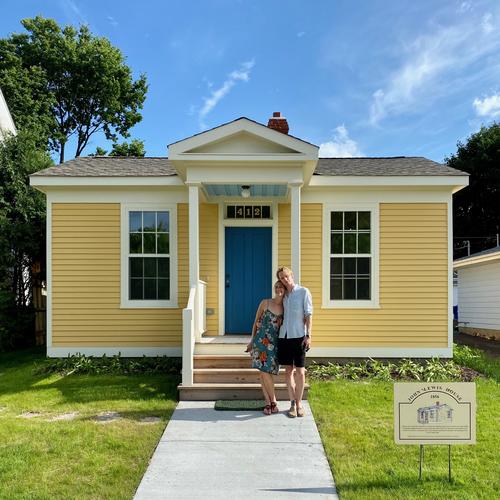 The historic John Lewis House at 412 Goodrich Avenue is a one-story, wood-frame, Greek Revival-style, pre-Civil War structure built in 1856 – two years before Minnesota became a state. It is one of the oldest residences remaining in the city of Saint Paul.

This small (approximately 800 sf) house, vacant since the end of 2015, was threatened with imminent demolition in the summer of 2017 due to its poor condition and Saint Paul’s vacant building policies.

A group of preservation-minded neighbors involved in Little Bohemia Neighborhood Association (LBNA) intervened to save the 163-year-old dwelling. Historic Saint Paul (HSP) agreed to partner with them to find a way to rehabilitate it, the city temporarily delayed pending demolition orders, and the property owner donated the house to Historic Saint Paul.

After preventing the demolition,  LBNA and HSP spent over two years developing plans to rebuild the structure, including period-appropriate finishes and all new mechanical systems. A thorough investigation revealed the need for a new foundation and reconstruction of the rear addition. We then raised over $90,000 in financial and in-kind contributions required to cover the difference between the total cost of development and the sale price of the house.

In the spring of 2020, the rehabilitation of 412 Goodrich was finally completed! And in only a short time on the market, it was sold to a new family who have begun living there. The John and Ann Lewis House is once again a family home providing a vital connection to the neighborhood's past and ensuring this connection well into its future.

Why it is important that the John and Ann Lewis House has been preserved:
It’s a rare and important artifact, a link to and signifier, of our city’s early history, a keen reminder that our past is part of our present and future.

Historic Saint Paul is engaged in efforts to identify, preserve, and...

When a property is threatened Historic Saint Paul often gets a call for...

Architectural Plans for the rehabilitation of 412 Goodrich