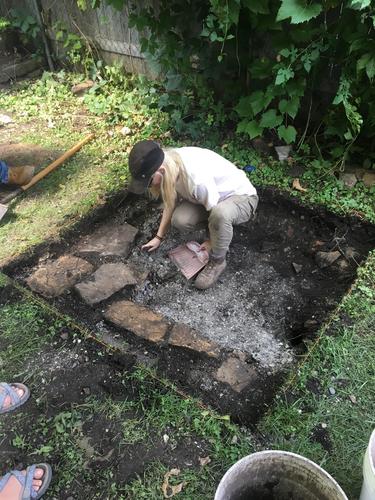 Lillie Miller
A volunteer archaeologist in the second excavation unit

The 412 Goodrich house was built in 1856 by John and Ann Lewis. Over its 160+ years, the building has housed many families, including the Walla family from 1867 to 1924 (Jim Sazevich). As a way to learn more about the house and its inhabitants, Historic Saint Paul (HSP) coordinated an archaeology dig of the 412 privy (outhouse). In addition to being a toilet, outhouses use to be the dump site for homeowners, which makes the privy a good archaeology dig site. Jeremy Nienow, a prominent local archaeologist, agreed to volunteer his time, expertise, and tools to lead the archaeology dig. HSP and Nienow looked at old sitemaps of 412 Goodrich to locate the area where the privy was likely to be. In an 1884 sitemap of the neighborhood, it was evident that the privy was located in the far right corner of the backyard. Since the map is just a rough sketch of the lot layout, the exact location of the privy was unknown.

The first weekend of the dig, July 21 and 22, 2018, the goal was to locate the privy. On Saturday, July 21st, the group started in the very back of the yard to dig the first excavation site. Nienow dug in 10-centimeter increments (four inches) and volunteers screened through the dirt. Screening is the process of shaking dirt through metal mesh screens to reveal larger artifacts. Each 10-centimeter level received its own artifact bag to ensure that the unit and level of each artifact would be known. The first excavation unit revealed many artifacts from the late 1800s to around the 1950s, including a toothbrush head, a doll’s arm, marbles, animal bones, and a lot of rusty nails and broken glass. Despite all the artifacts, this excavation unit was not the location of the privy. Once the group had excavated two feet, Nienow used a soil probe to see if he could find night soil (decomposed excrement, a clear sign of a privy) but instead of night soil, he hit limestone.

On Sunday, July 22nd, Nienow and HSP decided to begin digging in an excavation unit about four feet away from the first dig site because there was a slight depression in the ground, possible evidence that there used to be a privy there. As the group began excavating, it soon became apparent that they were digging in the correct place. The soil became very ashy which meant that the people living at 412 Goodrich had been filling the privy with ash from their stove to fill the hole. On Sunday, artifacts that were discovered included a pair of scissors and more broken glass, animal bones, and rusty nails. The group then filled in the first excavation unit and sealed the privy up so it would stay intact over the next three weeks. The group used wood to support the sides of the privy and placed tarps over the hole to prevent the sides of the privy from collapsing in on itself when it rained. Luckily, the support system worked and the privy remained intact.

On Saturday, August 11th, Nienow and the group of volunteers resumed excavating the privy. As they continued to excavate the privy, the soil the group encountered was primarily ash and small rocks. This indicated that the privy had been cleaned out and the hole was filled in with ash from the residents’ stove. It was common for privies to be cleaned out for sanitation and to reduce odor. Despite the privy being cleaned out, the group still found many artifacts throughout the ashy soil. When they reached the bottom of the privy (140-160 centimeters) the artifacts discovered were likely artifacts that had come from when the privy was being used as a privy and were not cleaned out with the rest of the privy in the 1890s.

On Sunday, August 12th, the group began by refilling the privy hole with soil and rocks. Once the hole was filled up, the group went to Nienow’s office to begin cleaning the artifacts. There were two full boxes of artifacts that needed to be cleaned. Animal bone and metal artifacts were dry brushed, meaning only a toothbrush was used to remove as much dirt and/or rust as possible. For glass and plastic, it was possible to use water in addition to a toothbrush to clean the artifacts. The group used cafeteria trays with paper towels to store the artifacts so they could dry. All the artifacts from one 10 centimeter artifact bag were kept together on one tray. The cleaning process is slow and time consuming, but the group had fun talking and trying to re-piece together broken glass. By 3:00 pm on Sunday, the group had cleaned one and a half boxes of artifacts.

In 2019, HSP applied for and received a Legacy Grant via the Minnesota Arts and Cultural Heritage Fund administered by Minnesota Historical Society to do a full analysis of the uncovered artifacts. Nienow Cultural Consultants under the guidance of Jeremy Nienow conducted the analyis which has resulted in a full report, the cataloguing of the most important artifacts, and donation of all of these artifacts to the Ramsey County Historical Society where they will be made permanently available to the public for viewing and further study. Nienow's report and a one-hour presentation of the archaeology project will be linked and available at http://historicsaintpaul.org/412Goodrich 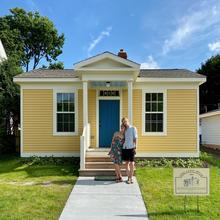